Cookson flies in to get a superb century

Cookson flies in to get a superb century 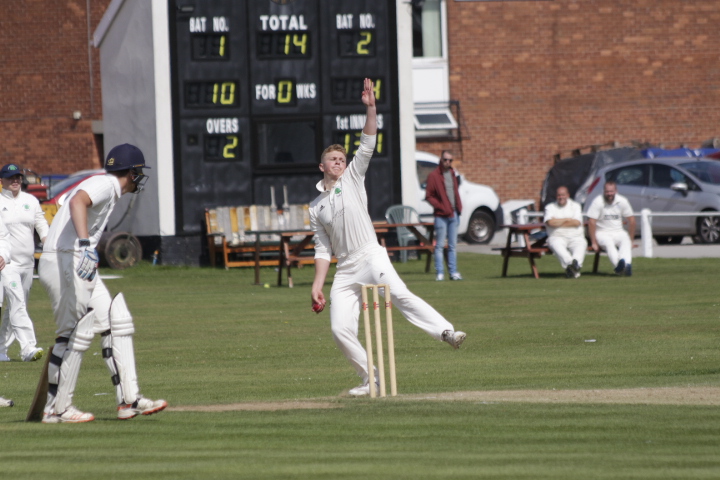 There was plenty of rain in the air on Saturday and conditions looked bleak before the start of play in all three of our matches. It was therefore surprising that all three were played out to a conclusion. There was some tremendous individual performances from Thomas Cookson and Jack Walmsley on a wet day to seal maximum points for one of our teams.

Firsts game gets the go ahead

The First Team (sponsored by Athletica Health Physiotherapy) were holding fort on the Little Knavesmire. They faced Ripon on what was likely their first trip to our ground in many years, possibly ever. The rain relented around the 1pm start-time. Losing the toss and batting first, Ovington were forced into a change in opening partnership. Joe Whale and Jack Walmsley took on the Ripon attack. They got off to a reasonable start. Ripon’s Jake Briscombe caused serious problems early, bowling a string of maidens but runs at the other end came a bit more easily. Whale survived a big LBW shout but was dismissed the next ball for 12.

Tom Cookson, who had only arrived back into the country a couple of hours before, then arrived at the crease. He and Walmsley put on another thirty before the latter was dismissed caught behind for 17. Cookson was the mainstay of the Ovington innings. He was considered in the early stages of the innings when the bowling was tough but hit the right balls to the boundary and accelerated his scoring rate as the game went on. He made decent partnerships with Tim Burgess (22) and Matty Roberts (39), helped in that latter duo by some excellent running. Cookson made his century in the 43rd over with a big shot to the boundary. He eventually ended up on 112 from just 118 deliveries and put Ovington on the hugely competitive total of 226-6.

See the Instagram post for videos of the moment Cookson reached his ton and other match photos!

Tea for our home games was provided by the excellent Good Food Shop, based on Bishopthorpe Road.

That total was instantly reduced due to a rain delay following tea. It meant that Ripon needed 207 to win from 41 overs. That was always going to be difficult to chase in the conditions and Ripon’s plight became tougher when Jack Walmsley benefitted from their opener shouldering arms to a straight one after just two balls. There was a bit of resistance in the top-order subsequently but Walmsley secured two wickets towards the end of his spell and Jack Eckersley-Wilson also got himself in the wicket column. It meant that Ripon were 33-4.

Weather a pain but games goes to a conclusion

Subsequently, it was always going to be a case of if the weather was going to win or Ovington. To the credit of both umpires, they kept the players out in quite tough conditions where both fielding and batting were challenging. The weather did subsequently improve after further middle-order wickets fell, with Tom Cookson and Benji Busby picking up two wickets apiece. The Ripon tail-end dropped anchor and the wicket of Liam Stephenson was particularly hard to come by. With the rain having stopped but menacing clouds around, and after a comical dropped catch from Charlie Buckley, Ovington needed to get the game done. Walmsley was reintroduced into the attack and took two wickets in an over to seal the game and another ten points.

Thirds have tough day at the office

Life was tougher for Ovington players at our other home game at Millthorpe School. They played Thorpe Willoughby at Millthorpe School and player availability was low, so two debuts to parents of juniors were handed out as well as a first game for Jamie Macnab. The Ovington batting line-up never really got going as we finished the innings on 54 from 30.5 overs. Ajantha Egodwatta and Graham Walton were the top-scorers. Thorpe Willoughby didn’t lose a wicket in their chase. There will be other days for this Third Team and an opportunity arises immediately today if the weather relents in a rescheduled cup semi-final.

The Seconds played Yapham and the game was shortened to a reduced 36 overs due to the threat of rain. Yapham batted first and their skipper Joe Moore dominated the scoring. He made 97 from the first 134 runs before being dismissed by Dick Buckley. That innings compromised over half of the total runs as they finished on 181-9. From an Ovington perspective, Josh Blower topped the bowling charts with 3-8 with Dick Buckley (3-40) and Luke Smith (2-56) others to get multiple wickets.

Skipper and Cole do their best but Seconds fall short

Ovington in their chase didn’t get off to the best of starts and were 20-2 from 8 overs. The recovery came from Andy Cole (32) and Luke Smith (31) who put on 62 in the next fourteen overs. Unfortunately, they both fell to Will Cardy in the same over as 82-2 became 83-4. There was about twelve overs remaining and a hundred to get, a tricky task. Wickets unfortunately fell rapidly in the middle to lower order as 83-4 became 114 all out, with Harry Eckersley-Wilson stuck on 8 not out. Cardy topped their bowling charts with 4-32.