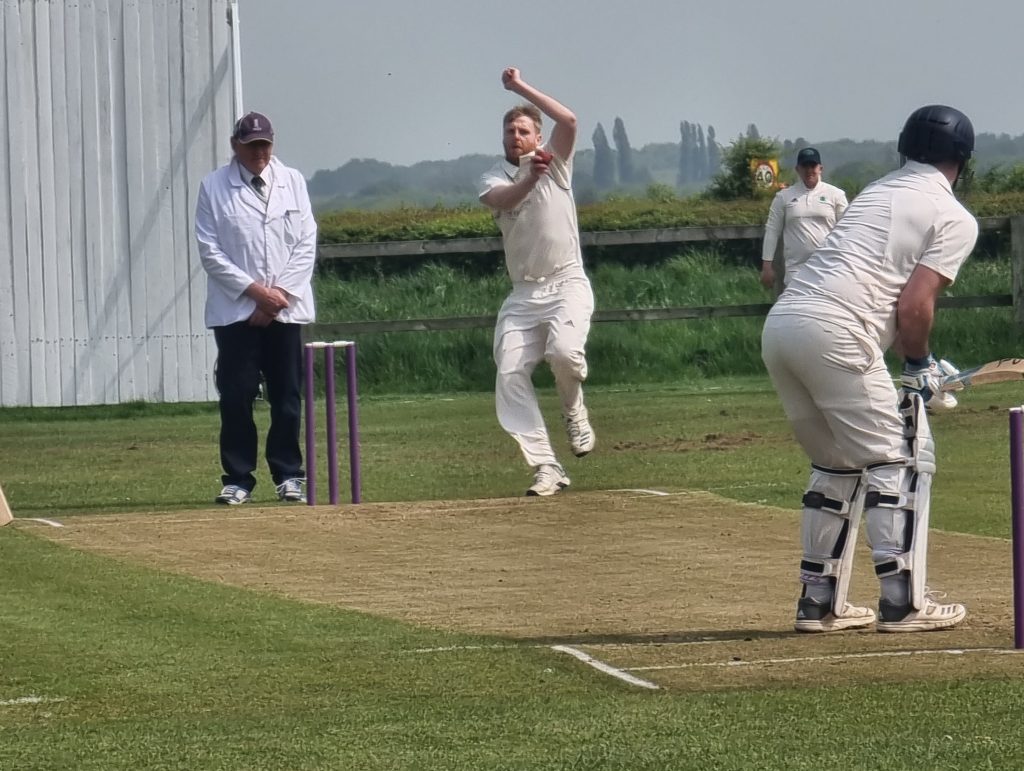 All three Senior teams were scheduled to be in action on Saturday, with all three involved in big games in terms of the placings in their respective league tables. The headline does kind of spoil it, but there was lots to write home about on a great day for Ovington sides.

Thirds get the win in unfortunate circumstances

The first success came off the field. The Third Team, on the back of a great victory versus Clifton Alliance IV last week, were gifted the win by Wheldrake. The visitors conceded on the day of the game which is not great form (Josh Fletcher’s own opinion and not one of the club). It was disappointing with a decent side available and players vying for a place in the cup semi-final in a couple of weeks. It also was heart-breaking for Brandon Bishop, who seemingly manages to avoid playing in actual cricket games for a multitude of reasons. This time out of his hands. He instead had to make the trip to watch the First Team play promotion rivals Pannal.

Brando makes the trip to Pannal in promotion battle

Pannal gave our First Team a rude awakening in the Second Division on the opening day of the season but both teams form has been similar since then and they saw themselves on a similar points total at the halfway point in the campaign. The home side won the toss and elected to bat, perhaps with the prior knowledge that Ovington don’t chase well. The talismanic Rob Ellis opened the batting and his wicket was key, averaging well over 50 in all cricket in 2022 and having scored a century against us back in April.

Jack Walmsley and Dom Kitching were handled responsibility for opening the bowling and both exceeded expectations. Kitching provided more evidence for the phrase “beware of the injured sportsman” although his illness was rumoured to be self-inflicted rather than organic. The duo took two wickets apiece early on meaning Pannal were 28-4, with Walmsley the recipient of the wicket of Rob Ellis. Kitching then took another to make it 29-5.

Four of the five wickets were all caught and it set the tone for the afternoon with some superb fielding overall throughout the side, including a stunning catch at long-on from Charlie Buckley and even Benji Busby holding on to two (2) catches. Dom Everard’s commitment to the cause was also unprecedented. Unlike earlier in the season where he spent the night in unfamiliar territory, last night had spent the night in the care of the NHS. He only went for 2.44 an over.

There was a fightback in the middle part of the game from Pannal but Tom Cookson’s introduction into the bowling attack, for the second time in two matches, led to wickets. His cameo of 4.2 overs led to three wickets for just fifteen runs. Pannal were dismissed for just 123 from 39 overs. Cookson took 3-15, Walmsley with 2-34 and Kitching with 4-24.

The new opening pairing of Cookson (20) and Walmsley (26) got things off to a solid start for the second week running, but both fell within three overs of each other. 59-2 however did become 102-2 as the partnership of Jacob Lamb and Matty Roberts (19) helped the scoreboard move along. It meant that with just 22 required to get the victory and eight wickets in hand, the game was almost a foregone conclusion. Although Roberts and a couple of his team-mates fell late on, Lamb was unbeaten with 36 from 46 and meant a five wicket win.

The Tea at Pannal was “unbelievable” according to reports. Captain Benji Busby had high praise for the way that Pannal as a club conducted themselves throughout their two meetings. The home side also featured a “cow-corner bar” which saw a couple of fielding highlights from the Ovington men. A great day out in great weather. It wasn’t such a lousy afternoon for Brando after all.

The Second Team had a trip to rather more known surroundings. They had a trip to the Hopgrove Playing Fields to play Stockton & Hopgrove. Luke Smith had an abundancy of wicket-keepers at his disposal on Saturday. By my count, there were at least five individuals in the XI who have acted as wicketkeeper in recent seasons. A couple of which had a pre-match meal at Toby Carvery.

Harry Buckley returns and is among the runs

Ovington batted first and although no-one individual hit a big score, many of the line-up chipped in with a few. Harry Buckley (40) made a welcome return and with Liam Herringshaw (24), they put on 65 for the first wicket. Both fell soon after one another. A couple more wickets fell after, with one in the line-up asked to “get back to the Senior League”. The offending fielder obviously unaware of teams able to have multiple teams in different leagues. At 81-4 the game was finely poised.

Stefan Littlewood (25) and Luke Smith (27, yet to play in the Senior League) both kept the score ticking along. There was a chance of a collapse after but Matty Valks (11) and Ollie Thrift (19) kept the score moving in the right direction. Late wickets did fall though, including Andy Cole being dismissed LBW in strange circumstances. Ovington were all out in the last over with Kalum Perera taking 4-15. It meant a total of 187.

The Stockton & Hopgrove reply got off to a rocky start. Stefan Littlewood, known more as a wicket-keeper, took the important dismissal of Dan Durkin for just four. Runs did flow at quite an alarming-rate thereafter though, not helped by Littlewood being no-balled for persistent short bowling. After nine overs, the score was 76 and things were looking bleak. Up to the plate stepped Simon Rogerson. After being hit for a boundary off his first ball, took the wicket of Athula Ranthyake with his next.

Rogerson and Smith do the business as Ovington win out

He was joined in the bowling department by captain Luke Smith. The duo then proceeded to dismiss the remainder of the Stockton & Hopgrove batting line-up. Rogerson at one stage took wickets in consecutive balls at a great economy rate. At the other end, Smith was more expensive but contributed in the wickets column. The Stockton middle-order fell rather cheaply. Rogerson bowled 10.3 overs and went for just 32, gaining another five-wicket plus haul in the process. Smith took 3-55 from his ten as it led to a sixteen run win and a superb victory overall.

Great weather and a great day for Ovington!

A great trio of victories on a warm day. It sees the First Team overtake one of their key rivals towards the top end of the Second Division. It also sees the Seconds avenge a tight defeat on the opening day of the season. Focus for next week is on the First and Third Teams. The Firsts host Duncombe Park, with the Thirds going to Pocklington. The Second team have no game.