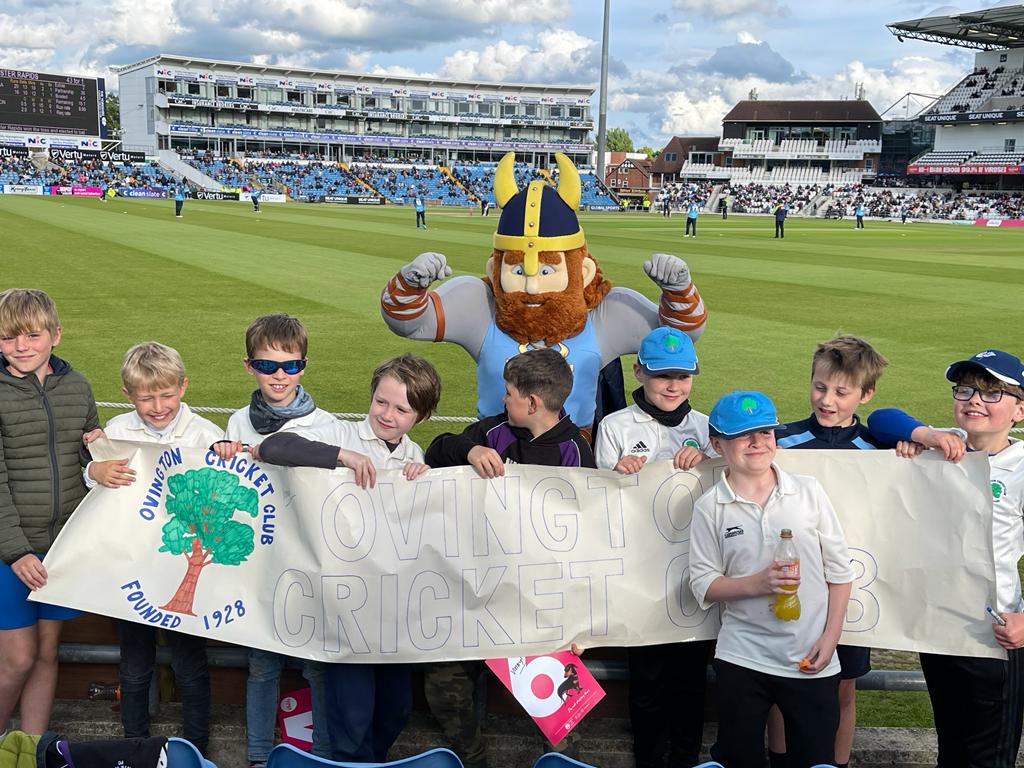 Ovington Juniors season is in full swing again after a short break for half-term and there’s been lots of great performances from our young players over the last couple of weeks!

Before half-term, some of our young players from our U11’s and U9’s team enjoyed a social trip to see Yorkshire play Worcestershire in the T20 Blast. It looks like an excellent time was had by all, including pictures taken with, Joe Root, Jordan Thompson, Vinny the Viking and featuring on the YouTube coverage of the game. Thank you to Louise Breed for organising.

On the pitch, Ovington’s junior sides had a successful time of things prior to the schools having a week off, with victories in three out of four games. Reports are in a chorological order – the games before half-term coming first!

The Under 11’s “A” team hosted what is often a tough match-up vs York. The away team decided to bat first. Details are scant on how the York batters got on but from an Ovington point of view, there were lots of positives! Ethan Currie (3-9) and Wilf Metcalfe (3-10) both made good use of their extra overs,. That was accompanied by a great direct hit run-out from Jack Matthews, which set the tone for an excellent all-round performance from the Ovington side. Also among the wickets for the home team were Seb Hardy and Matthew Pooley. It meant Ovington kept York U11’s down to just a net score of 211.

In reply, Ovo got off to a good start. Opening pair Thomas Robinson and Jacob Laing got us ahead of the target score. What followed was generally a solid display from the middle and lower order. It did include an audacious ‘scoop shot’ attempt which may require more practice but the Ovington batting, including from Rory Walters (7) and Wilf Metcalfe (7) held it’s nerve to won by a comfortable 50 run margin.

That same week saw the Under 11 “B” team make the short trip to Acomb where early runs were at a premium due to some good bowling from the hosts. Patience was required by Ovington supporters as it was not until the middle to lower order that the Ovington batting found it’s stride. The fightback started with Alex Taylor Guino and Ollie Breed both making positive run contributions, Breed being partnered with George Payne. It was then the last pairing of Oliver Craven (24 from 17) and keeper Jacob Baldwin, who put some excellent runs on the board. A total net score of 260 was very respectable.

The early Acomb innings mirrored that of Ovington! Jacob Laing opened the bowling and took two wickets in an excellent spell, aided by a run out. That meant Acomb were always on the back foot in terms of chasing the total down. Although they did get some late runs, their last pairings did not score as effectively as Ovington did. There was economical bowling spells from many, including Wilfred Allen, Oliver Craven and Edward Monaghan (in the late overs). Byes were kept to a minimum by wicketkeeper Jacob Baldwin as Ovington were successful by 20 runs in a real team effort.

U9’s C level up the results vs Clifton

There was no such luck for the U11’s team that week as they played a strong Clifton Alliance side. That Cliftom team featured plenty of representatives in local select sides. It was around an 80 run defeat for Ovington but that did include positive performances from Wilf Metcalfe (17 not out) and Jack Matthews bowling two maidens. Ovington U9’s age-group did get their revenge though as the respective “C” teams faced off in the days around it. That was quite a comprehensive victory with runs coming from all six of the Ovington batting line-up. It was their second win of the season.

U13’s long trip to Londesborough in the cup

After a brief pause in Junior games on the week of the Jubilee, the U13’s made the long trip to Londesborough Park to play in the U13’s cup. It always had the makings of a tricky assignment but in true Ovo fashion, we won the toss and elected to field. Spencer Fern took 2-12 from his three overs and had the home side at 32-2. Wickets were harder to come by afterwards though, as Londesborough Park hit 166/3 from their twenty overs. There was no shame in that though, as Ovington used ten bowlers. Wilf Metcalfe took 1-6 from his two overs to take the wicket of Seb Staal. Will Hampel, Will Abigail, Phoebe Andrews and Jacob Mellows all finished their spells with economy rates in single figures and the whole team stuck at it well.

Good start made but batting was tough

The opening partnership of Spencer Fern (14) and Wilf Metcalfe (17) got Ovington off to a good start, both hitting multiple boundaries in their innings. Both were dismissed within a short period and the remaining Ovington batters found things tricky. Jack Matthews (9*) did his best but in the end, Ovington were knocked out of the cup by a strong side.

Monday saw the U11’s B team, which plays hardball cricket, face Sheriff Hutton Bridge. Ovington batted first and runs were unfortunately hard to come by that night. To our credit, wickets did not fall as quickly as they might have either for the most part. Fraser Watt, Alex Taylor Guino, Toby Metcalfe and Yash Fitzgerald all came away from their innings without losing a wicket. Our top scorer was Oliver Craven as the set a target of 228 for SHB.

It was going to be tough to defend that total but Ethan Currie took two wickets in his opening spell to make things interesting. Unfortunately, wickets were at a premium for the most part, even though Ollie Breed took 1-6 from his duo of overs. SHB navigated the latter part of the game nicely to win by 33 runs.

Two Under 9’s teams in mid-table faced off this week as Ovington made a short dash to Copmanthorpe. Ovington were put into bat and Lubo Snee and Fraser Watt got Ovo off to a good start with neither dismissed. There was more wickets in the next pairing but more runs, as Toby Metcalfe net score of 15 was highest in the Ovo innings. Ben Fricker was his partner. A couple of late wickets fell but Ovington put on a total of 274 from their twelve overs, with Yash Fitzgerald hitting some late runs too.

Wickets in the middle-order were the downfall of the Copmanthorpe chase as Olives Babbs, Fraser Watt, Ben Fricker and Toby Metcalfe all finding their way in the wickets columns. Babbs and Fricker both went for <2.25 runs an over. It made things difficult for the home side and they eventually fell 21 runs short. A great all round effort from the team.

Thursday night saw the U11’s in cup action, taking on Heslington. The cup match format is played in a regular way. Experience of that format of Cricket surely helped as opening pairing Wilf Metcalfe (18) and Oliver Craven (19) got Ovington off to a very promising start. After both were dismissed, Ovington were at 50-2. The middle-order partnership of Matthew Pooley and Rory Walters put on 22 for the 4th wicket, with Walters finishing on 13. Ollie Breed (9*) and Jack Matthews (4*) were in at the end as, helped by extras, Ovington scored 92 from their 20 overs.

In reply, Heslington did not lose early wickets but got behind the run-rate from some hugely economical bowling. There is almost too many to mention here but I’ll try, with Imogen Brook, Jack Matthews, Matthew Pooley, George Payne, Ethan Currie, Rory Walters, Ollie Breed, Seb Hardy and Wilf Metcalfe all having spells of bowling with less than 2 runs an over conceded. Wickets were at a premium, with Jack Matthews, Ethan Currie, Oliver Craven and Wilf Metcalfe the recipients. They were against an Heslington side who deserve huge credit for digging in and keeping Ovington at bay for the most part. Eventually they fell 38 runs short but only lost five wickets.

Looking forward to hearing about how Ovington juniors and their respective teams get on over the course of the next week!