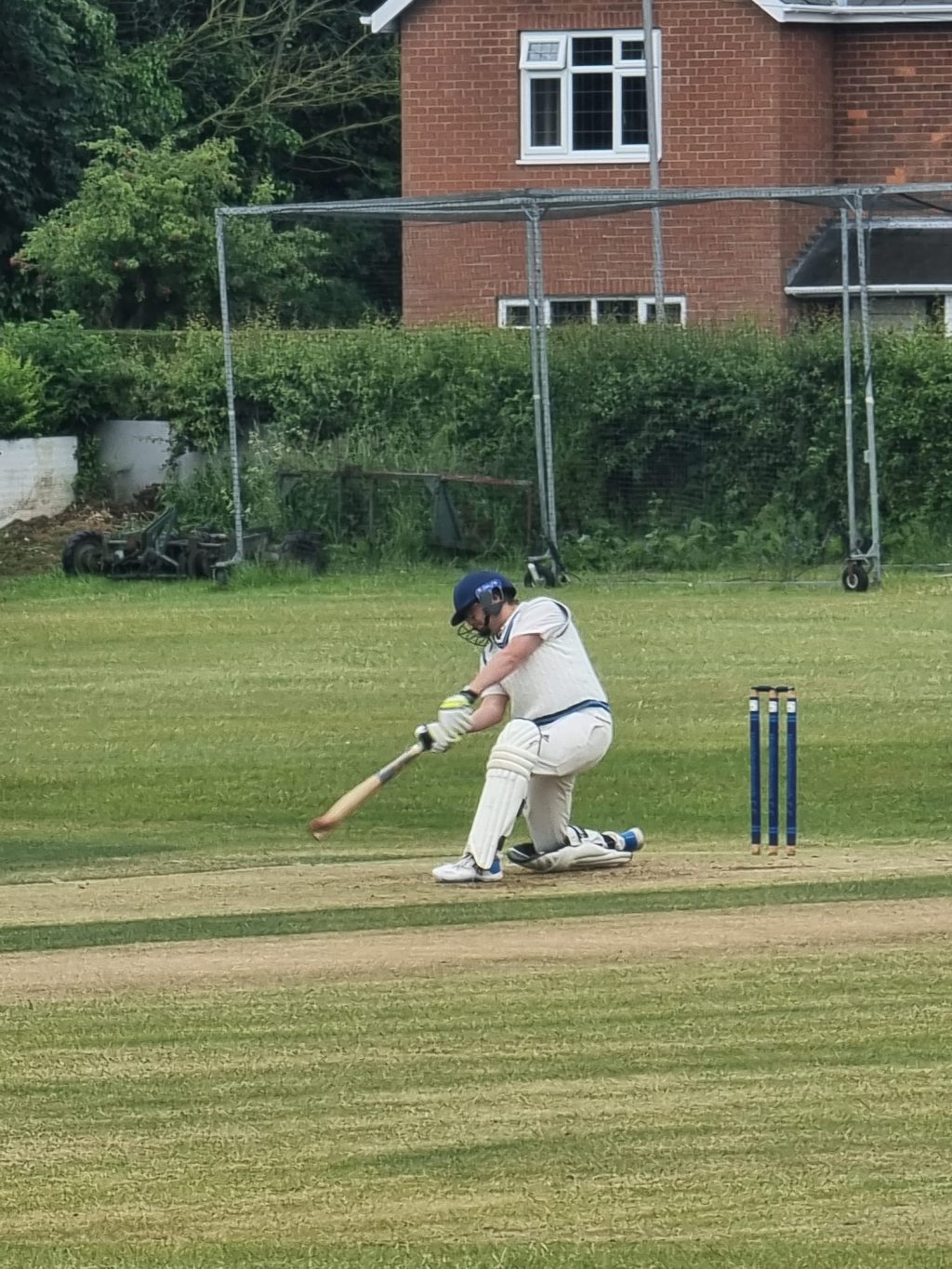 There was so much to celebrate this weekend as Ovington sides were back among the maximum points. All across the club we had some great individual performances to write home about especially from Tim Burgess.

Firsts off to a bad start with the bat

The First Team (sponsored by Athletica Physiotherapy) hosted Easingwold II on the Little Knavesmire. With both the usual opening bowlers missing, music festivals and the desire to earn ‘boyfriend points’ meant there was a different look in areas to the side that beat Acomb II. Benjamin Busby won the toss and elected to bat. At 14-2, it didn’t look the best of decisions. Easingwold skipper James Postil bowled accurately and was tough to get away. He eventually bowled out his twelve overs for 2-18. Easingwold will come away in the evening ruing missed chances in the field. Both opener Joe Whale and #4 Tim Burgess were dropped at least once each off fairly regulation chances, and as Postil completed his spell, Ovington were only on about 55-2 from the 24 overs.

As all good batters do, they take advantage of fielders mistakes and the proceeding twenty overs was a masterclass of punishing the bad balls. Both Whale and Burgess reached their half-centuries within a couple of overs of each other. Both hit multiple maximums, including some huge straight sixes. As Whale fell after being caught on the boundary for a well-made 52, Burgess took over. Supported by Matty Roberts (36 not out from 26) – Burgess cut loose and the partnership put on 86 in the last nine overs. Burgess eventually made his maiden ton with a couple of overs to spare. Ovington finished on 222/3 from their 45 overs and firmly in the driving seat.

Easingwold, unlike the hosts, got off to a good start. Wicketkeeper Piercy and Steve Raper looked comfortable after a tricky first over. That was until Piercy mistimed one off Neil Metcalfe that went straight to Tim Burgess in the field. His opening partner was caught and bowled off what could be described a soft dismissal not long after and the visitors went from 64-0 to 66-2. Wickets fell fairly regularly subsequently, with Neil Metcalfe and Tom Cookson both taking three dismissals apiece. It included a smart Matty Roberts catch. There was minor peril for Ovington with Joshua Greenlay (25) and Sheraz Kasi at the crease, but when the former was out at 138-6, a successful chase looked out of the question. Easingwold plodded on to get 2 batting points with Kasi (44*) in at the end. Ovington were 30 run victors on a red-letter day for Tim Burgess.

Sunday isn’t the usual day for Third Team Cricket but due to ground clashes at Hemingbrough’s ground, that was the day. It was a lucky omen as due to the selection issues around the club, we’d have struggled for three teams. Instead, able to lean on some of the junior talent in the club, we were able to get a team together. Brandon Bishop, yet to skipper the side this season, was on holiday. A fact I shouldn’t have had to mention given the number of photos of himself and his Ovo cap around the island of Pathos. Frustratingly, his flight was cancelled on Saturday and therefore was unable to fly back to support his side. Ollie Thrift was in charge once again.

No batting woes for Ovington this time around

Frequently, batting has been the Achilles heel of the Third Team. Hemingbrough blew through our top-order last year twice, and wisely decided to field first, also fearing the weather would turn. Openers Graham Walton and Lucas Moore performed valiantly against the pacey Sachin Madhas and the well-known ‘gunslinger’ Granville North. They got Ovington to 28 before Walton fell, with Moore caught not long after. Skipper Ollie Thrift took to the crease and his innings of 27 included four boundaries. He was ably supported in the middle-order by Jimmy Taylor, making his first Ovo appearance as a dad. His score of 40 was a great knock given the lack of match-practice. It helped navigate the tricky middle overs.

With Thrift and Taylor both out, the score was 135-5. Some late order runs from Andy Cole (23*), Jed Fowke (16*) and some generous extras in the wides and no balls column, put Ovington on the very respectable final total of 194-7.

Harry Eckersley-Wilson took his first wicket of the day with the 4th ball of the innings, setting the tone for what was to come. In arrived Sachin Madhas, who had scored a lot of runs against us in this game last season. At 34-1, a key moment of the game occurred.

Madhas, scoring runs comfortably, squirmed one way towards short leg. Called through for a run by his partner, wicketkeeper Lucas Moore sprung into action. Sprinting round his stumps, a brilliant pick up and throw to the non-strikers end hit the stumps directly. Madhas was run out for 20 and the likely direction of the game turned on it’s axis. It was an excellent piece of fielding and invigorated the whole side.

Although there was some resistance from the rest of the Hemingbrough batting in parts, Ollie Thrift and Harry Eckersley-Wilson took three wickets apiece as the home side could only reach 125 all out. It was a tremendous victory for the thirds, their first league (on the pitch) win in 1001 days and aptly, the first senior weekend cricket victory for Lucas Moore who was so vital with the earlier run out.

Herringshaw with a great knock

The Second Team were holding fort on Saturday against Ben Johnson at Millthorpe School. The pitch played very well but had the appearance of something that ought to be a geological dig. It was then no surprise that our expert in such matters, Liam Herringshaw, batted so excellently. An array of shots, including some great straight 4’s and an improvised ‘ramp shot’ one of many highlights. He was only dismissed for a very well made 75, with the score at 136-7 and 31 overs gone. A late salvo from skipper Luke Smith, possibly with a point to prove after my comments last week, was the next best with 22 not out. It set the total of 168 all out. Bharath Soundararjan took 6-29 for the visitors.

Ben Johnson known as a batting side and although they did lose a wicket fairly early, the total for them was reached with a minimum of fuss. Albert Webb took two late wickets to get Ovington a further bowling point, as the visitors reached the target with 15 overs left for the loss of four batters.