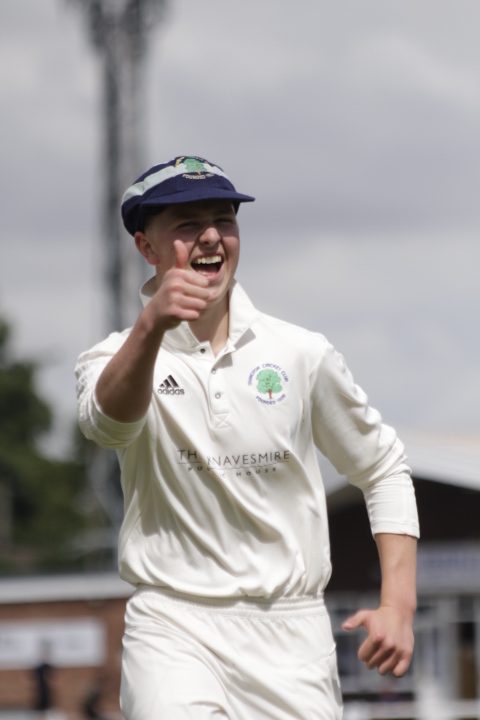 There was plenty to celebrate in the South Bank area of York on Saturday as Ovington success was for both our two sides in action, the First and Thirds. It was accompanied by the sounds of the York Pride Festivities.

At Millthorpe School, spectators were treated to a rare sight. Newly-engaged Brandon Bishop was available and able to captain the side! The occasion was a cup quarter-final against Selby III with perhaps Bishop smelling success with on paper a ‘winnable’ tie versus a side from the division below. His first action as skipper for the game, apart from organising the netting to protect the South Bank Avenue houses, was to lose the toss. Ovington were set into bat and found the going really tough. Opener Graham Walton stuck it out but at the other end, with some excellent bowling from the Selby attack, as Ovington fell to 33-4 from 14 overs.

Fowke and Walton lead the fight back

It was the pairing of Walton and Jeremy Fowke that led to a fightback from the home side. They played sensibly against the accurate balls and punished the ones that weren’t. They batted together for sixteen overs and in that time put on 92 for the fifth wicket. Walton fell agonisingly short of his half-century for 47. The score was a lot more respectable now at 125-5. Jed Fowke was still at the crease and although wickets fell at the other end, Fowke kept the score moving and ended his innings bowled for a very important 55. Some late runs from James Wilkinson (12), dismissed on the last ball in a rare case of a batter questioning if he was bowled, helped Ovington get 163-9. Zac Buttle for Selby took 3-33.

Ovington made instant progress in defending as Harry Eckersley-Wilson took his first wicket at the end of his second over. Things didn’t go all straightforward for the next period of the game as the Selby batters took their time and accumulated runs on the board. The introduction of Josh Blower changed things as he took a wicket in his second over too. Vice-captain Thrift took another dismissal a few overs later to put Selby at 58-3. The game was leaning in Ovington’s favour but a very useful partnership between two juniors, Zac Buttle and Rhys Roddick, put the score to 98-3.

The right bowlers on at the right time

Captains have to make the big decisions and Brandon Bishop made the right ones, as he re-introduced Harry Eckersley-Wilson to the attack in the 27th over. He clean bowled Roddick first ball and that set in motion a flurry of Ovington dismissals. Albert Webb was brought into the attack the over later and our Under 15 duo swung the game in our favour. Webb eventually finished with figures of 4-19 and Harry Eckersley-Wilson 3-37 as they held their nerve. Selby fell 23 runs short in a competitive game played in the right spirits. Ovington advance to a semi-final and pick up their second (on-field) win of the season.

The First Team (sponsored by Athletica Physiotherapy) faced Osbaldwick. Two teams who gained entry to Division Two via different means. Loud music dominated the proceedings but it was the Ovington bowlers that made the most noise early on in the game. Jack Walmsley took two wickets in consecutive overs to put the away side 11-2. Walmsley took another wicket with Neil Metcalfe (2-42) and Tom Cookson (1-30) helped keep the visitors to 82-6.

A low score looked odds-on but Calum Walton had other ideas. His forceful 49 came off 39 deliveries and although he lacked support from the other end, it did put Osbaldwick to 145-8. There was some late runs from Robert George and Ovington were perhaps ruing those as it meant the score got to 169 all out. Busby took 2-15 late on.

No worries in exemplary run chase

The run-chase was as straightforward as it gets. There was no early jitters from the pairing of Thomas Cookson and Charlie Buckley. They put the right balls to the boundary and kept their concentration up across the early part of the game. They cut loose, especially Cookson, both reaching their half-centuries before Buckley fell for exactly 50. Cookson was joined by Jacob Lamb, who scored at better than a run-a-ball. Ovington got the game won in record time with one eye on the weather. Cookson was not out for a brilliant 80 off 86 deliveries. It included three maximums.

The nine wicket win meant that Ovington keep pace with the leaders in Division Two. A tough assignment comes next. Dunnington are unbeaten and the Ovington side is likely to be much-changed given injuries and absences. It will be a true acid-test of their likely place in the division as the season wears on.