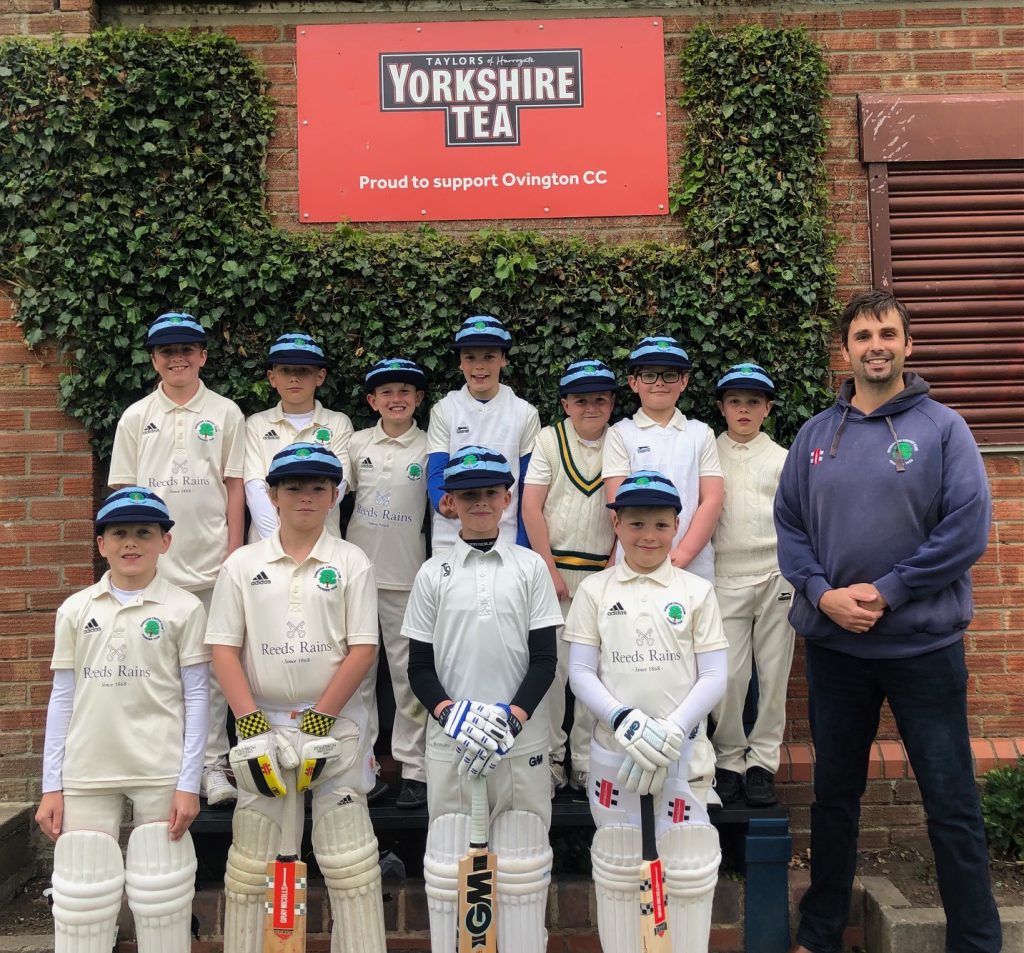 The Junior season is in full swing and there was some terrific performances across the club. It included one individual hitting four boundaries in an over, with others successful with both bat and ball. There was also our female juniors taking wickets and scoring runs at crucial moments!

It was a week ago last Sunday that the Under 13’s made the trip to Hillam & Monk Fryston with a depleted in numbers team. Our Under 13’s were helped in the top order by Jack Matthews (20) as wickets fell around him. Matthews eventually found a partner to score runs with as Matthew Pooley (19) helped the visiting side reach 72-7 from their twenty overs. Pooley hitting four boundaries in his innings, Jack Matthews with three.

It was always going to be tricky to defend such a total. Ovington were unable to dismiss opener Alfie Brewster but made progress elsewhere. Wickets came to Spencer Fern, Jack Matthews, Will Abigail and George Payne as Hillam reached the total with around four overs left for the four wickets. A spirited effort given the circumstances from all concerned.

Under 15’s involved in thrilling match

Last Monday saw the Under 15’s (sponsored by Jack Stearman) face off against Clifton Alliance ‘B’ in what turned out to be a thrilling game down at the Little Knavesmire. The visitors won the toss and elected to bat. Wickets fell at regular intervals but it still meant that a decent total was able to be posted by Clifton. Harry Eckersley-Wilson took 2-7 from his four overs and although no other bowler was particularly expensive, the visitors were still able to accumulate 85-9 from their twenty overs. Wickets were evenly spread around the team with Spencer Fern, Josh Blower picking up two dismissals each. Those also in the wickets column were Casper Fleming, Seth Young and Finn Stephenson.

Dodson and Fleming hold their nerve

Ovington probably got off to a better start and were 36-1 with Lucas Moore and Wilf Metcalfe both going well. Both fell in reasonably quick succession and Ovington fell to 49-5. Josh Blower and Oliver Dodson helped take the score to 69-5 before Blower was dismissed. That became 70-8 after Joshua Snelgrove took two quick wickets. Things looked bleak for Ovington supporters but the pairing of Dodson and Casper Fleming showed remarkable restraint – keeping the good balls at bay and letting the extras accumulate the score. Ovington eventually reached the target with three overs left but with just two wickets remaining. Dodson was on 13 not out with Fleming on 3, but both deserve huge credit to keep their nerve.

The Under 15’s (sponsored by Jack Stearman) went for the double the day after versus Clifton Alliance, but this time their ‘A’ side. There was a stark difference in fortunes as Ovington did not score as many runs as they would have hoped. They didn’t lose all their wickets but found runs hard to come by. Lucas Moore top-scored with 10 as Ovington only reached 43 from their twenty overs. It didn’t take Clifton long to knock off the total doing so in eight overs.

Breed starts U11’s B off innings in style

The Under 11’s ‘B’ team were in hard-ball action hosting Copmanthorpe last Monday at Millthorpe School. Ovington batted first and Ollie Breed got us off to a great start, hitting a boundary with the first ball of the match. Breed ended his innings on a net score of 14. Known for their bowling more than their batting, this U11’s B team managed to accumulate runs via extras in this instance, although lost too many wickets. The running between the wickets though, was much more encouraging! Toby Metcalfe was one not to be dismissed as well as George Payne. They ended the innings on a net total of 254-5.

Wickets were hard to come by in the Copmanthorpe innings for the Ovington bowling. We did however, manage to keep things tight and it meant runs were hard to come by as well. Among those with particularly economical figures included George Payne (1-3), Wilfred Allen (1-5), Jacob Laing (1-9) and Jacob Baldwin (1-4). No Ovington bowler went for more than six-an-over though as we ran out 13 run winners. Great effort!

Babbs bashes Bridge to the boundary

The Under 9’s hosted Sheriff Hutton Bridge a week ago in what is usual a tough fixture. Ovington though batted superbly and fully deserved the big total they got. It all started from great work from Yash Fitzgerald who reached a net score of double figures. It was then that the second pairing of Toby Metcalfe (10) and Oliver Babbs (29) really took the bull by the horns! Babbs incredible innings came off only 11 deliveries and featured zero dismissals. The last pairing of Fraser Watt and George Fernely (12) didn’t lose their wicket either as Ovington put 292 on the board for the opposition to chase. In response, Sheriff Hutton Bridge lost eight wickets and were short by seventy runs. A terrific batting and bowling display from all involved!

Metcalfe top-scores with 25 vs Heworth

On the same night, the Under 11’s ‘A’ side travelled to Heworth. Wilf Metcalfe put in a player-of-the-match performance. The good work was started by Thomas Robinson (10) opening the innings. The score ticked along until the third pairing of Metcalfe and Jack Matthews took over. Metcalfe hitting 25 from 17 balls. That really helped the score along with some late runs from Oliver Craven. That put Ovington to defend a net total of 260.

Matthews with maidens as wickets shared around handily

Opening the bowler, Jack Matthews comes out with some ridiculous looking figures. Two overs, two maidens, zero runs for one wicket taken. Dismissals continued to be taken by the Ovington bowlers as Thomas Robinson, Rory Walters, Seb Hardy (2-9) and Ethan Currie all among the wickets. Even Matthew Pooley and Oliver Craven, who did not take a wicket, only went for a solitary run per over. That helped build the pressure as Wilf Metcalfe took 2-11 as Ovington ran out 49 run winners.

There was more good performances across the younger age groups as the Under 9’s B and Under 9’s ‘c’ teams were successful last Wednesday. They won by 135 runs and 41 runs respectively.

U11’s Incrediball through to the semi-final

Ovington representative sides were in action on Thursday where they made the trip to Thorpe Willoughby. This was the incrediball cup at U11 level and it was a closely run match. Ovington elected to field and the home side did not lose wickets but did not score at a great rate either. They lost two wickets, both taken by Ethan Currie (2-4) in a bowling performance where no individual went for higher than 4-an-over.

Wickets fell early in the chase putting Ovington on the backfoot but we recovered in the middle overs. Ethan Currie and Imogen Brook both scoring 9 each in the second pairing. All of the last four made positive contributions with the bat and it was Rose Elgie and Yash Fitzgerald who swung the game in Ovington’s favour. Their double figure totals were just enough to get Ovington over the line, even with a couple of late wickets falling. Edward Monaghan recovered though and we advanced to the semi-final by just seven runs.

The Under 13’s aimed to bounce back from their defeat the previous week vs Hillam as they hosted Clifton Alliance B. The home side showed resilence with the bat as they comfortably fulfilled the full twenty overs. Runs were hard to come by for the most part and it was Spencer Fern (15*) and Will Hampel (16) who were the top-scorers in Ovington’s 73.

Maya Fitzgerald took an early wicket to make things interesting and that dismissal was followed up by Phoebe Andrews taking two of her own. That put the score at 26-3 and the game evenly poised, but the home side had failed to dismiss opener Harry Smailes. He retired when reaching 30 and therefore it didn’t need much more from the visitors to reach the total. Thomas Robinson was involved in a good run out as Clifton ran out six wicket winners. Phoebe Andrews took 2-5 from her spell as Ovington used ten different bowlers.