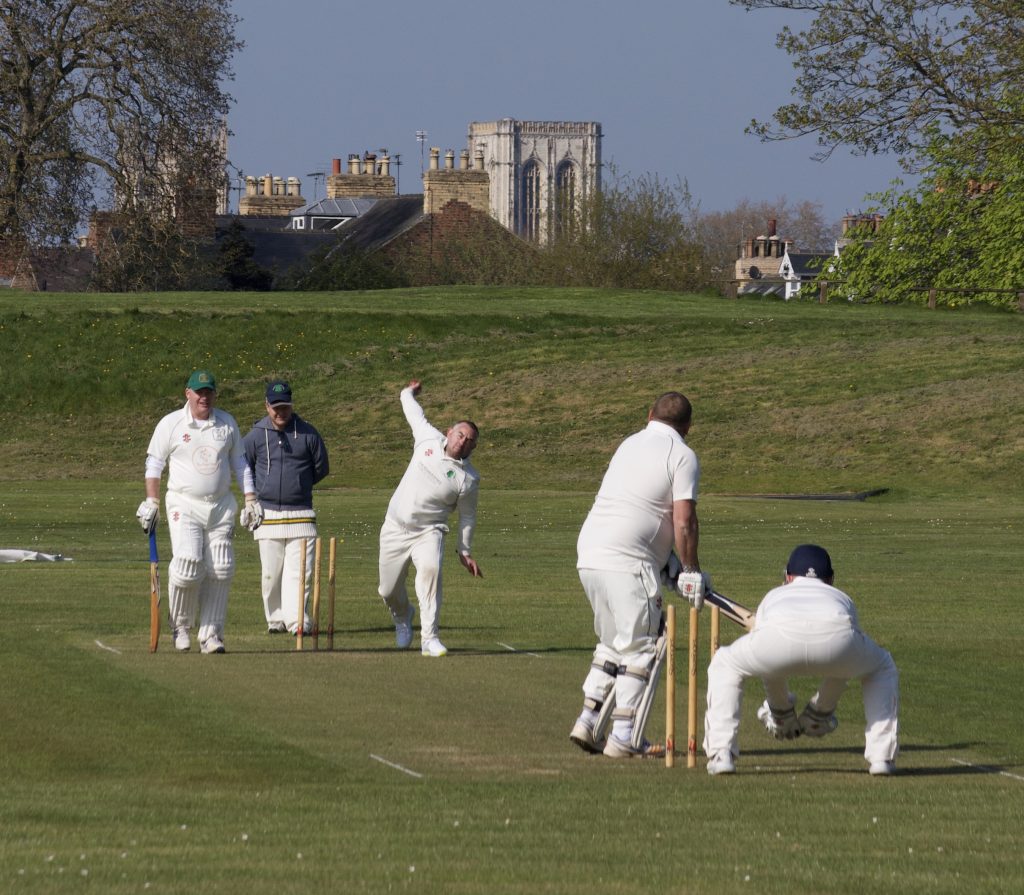 The opening weekend for Ovington Cricket and their senior season saw high winds scupper the sightscreens at our Millthorpe School ground on a dramatic match on top of the hill. The First Team were in action on the Little Knavesmire, alongside a controversial Sunday outing for our Thirds who travelled to Wheldrake.

Featured image pic from Liam Herringshaw. A full gallery can be found on his Flickr page!

A huge thank you to all of the club sponsors at this time.

Stockton & Hopgrove visited Millthorpe School for the Second teams opening game of the 2022 York Vale League season. Ovington always reward our captains for good work and for surviving relegation in Division Two, Luke Smith’s first league game in charge got off to a strong start. A second wicket stand of 119 between Harry Buckley (66) and Tom Armes (49) saw Ovo reach 122-2. Wickets fell more regularly subsequently but a promising debut from Simon Halford-Thompson, who was playing without the aid of properly working ACL ligaments in one knee, looking adept off the back and front foot, scoring 36. That left Ovington II with the potentially formidable total of 195 from their allotted 40 overs. For the visitors, Jamie Kerrison (2-37) bowled with some real pace.

A feature of the Stockton & Hopgrove reply was that many of their batters got starts but failed to kick on. Harry Eckersley-Wilson was unlucky not to get an early wicket and although he started with a couple of slightly varied overs, Simon Rogerson hit his stride and took the important wickets of Rich Kerrsion, Rob Cockerill and Rathuayake. That left them 53-3 but from only 10 overs, showing the run-rate was always about on par or better. The Stockton batters continued to accumulate to an individual score between 10-25 before succumbing to our bowling attack, with Dick Buckley (4-43) taking over from Rogerson in the wickets column. An evening wedding invitation meant that Tom Armes had to depart at 17:15 meaning Ovington fielded with ten for the second half of the innings but at 160-8, Ovo looked to be favourites. Late runs from Andrew Brookes (26*) and S Kale put the game on a knife-edge and swung the momentum to the away side as the match came towards it’s conclusion.

With the score at 193-8, the visitors required just three runs in the final over. With Rogerson having returned to the attack, Kale tried an aggressive drive through the off-side, only for the ball to be snatched out of the air by Brandon Bishop. 193-9, five balls left and the new batsman on strike! Or not! With the umpires determining that the pair had crossed (a law that is set to be changed in October 2022). Thus returning the set batter in Brookes to the crease. A two down the leg-side followed by a quick single gave the visitors a dramatic win by one wicket with three balls remaining.

The First Team (sponsored by Athletica Physiotherapy) took on Pannal CC for their first game of the 2022 season, now at the heights of the Second Division of the YPLN. Tasty, delectable and flavoursome were all adjectives used subsequent to the game, but unfortunately they referred to the teas from the Good Food Shop and not the Ovington batting, as we fell 50 runs short . Pannal opener Andrew Ellis scored 104 as he put the home attack to the sword. When he eventually fell, the score was 164-4 and although we recovered somewhat from then, with Walmsley, Kitching and Busby all among the wickets, a score of 199-9 proved too much. Tom Irwin (48) perhaps didn’t get in early enough as wickets fell around him, with only Dom Kitching (19) providing late resistance in the lower order. A big thank you also to Joe Fowke who scored for the team on short-notice. Very much appreciated by all at Ovington Cricket Club!

The Third Team were having their first match in the era of new captain Brandon Bishop on Sunday. The ones who are paying attention will notice he already played, so in fact Ollie Thrift took charge. A mixture of young and old made the trip to Wheldrake, who were bolstered in their ranks by at least two individuals who played Senior League the previous afternoon. Ovington struggled with the ball but didn’t give up when things got tough. Praf Thakare who plied his trade at a sadly folded Long Marston last season, struck an impressive 91 and was top-scorer. Wickets were spread around the attack with the pick of the bowlers who had more than one over, being Jed Fowke’s 1-27.

With a formidable total on the board to chase, it was a chance for Ovington’s batting to “hunker down” for winter and see what they could do. Early wickets fell but it was Thrift, inspired by the role of captain, scoring 34 who got the early runs. Unfortunately he couldn’t stick about with David Warner, who even armed with a shirt sized for an Under 15, managed to frustrate the Wheldrake attack. He led the lower-order to a respectable total of 129, falling for the last wicket after securing his first half-century for Ovington cricket club. Although a heavy defeat, the side can take real pride in how they fought throughout. Positive too was the bonus points secured, which meant that we were not at the foot of the league table at the end of game-week one.

Back to normal service with the senior sides at Ovington Cricket Club all playing on a Saturday next week.