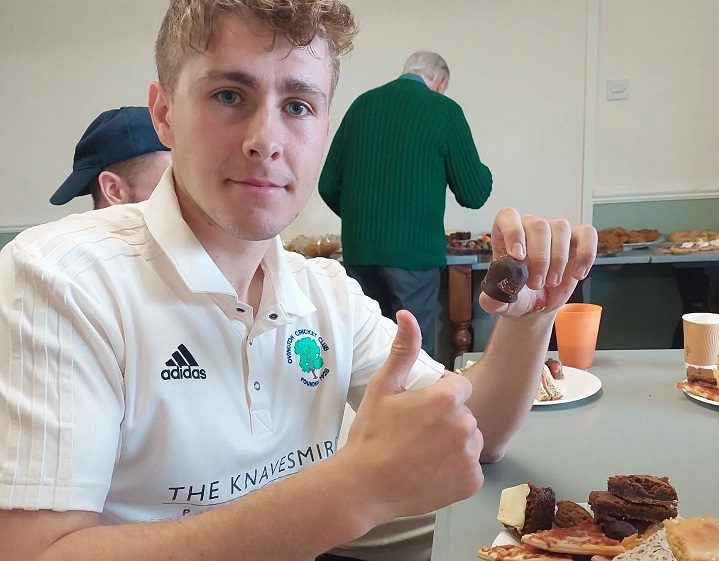 It was back to winning ways for Ovington sides on Saturday as two of our teams were successful. There was also plenty of great individual efforts across all three teams.

70 the unlucky number for top-order

The First Team (sponsored by Athletica Physiotherapy) made the short trip to Acomb II, also promoted from Division 3 over the winter. It looked an ideal batting surface and was a great toss to win. Thankfully, captain Benji Busby called tails correctly. The opening partnership of Tom Cookson and Joe Whale got Ovington off to a solid start. After a couple of close LBW calls, they were really starting to get into the groove before disaster struck. First, Whale hesitated to set off and was run out. Tim Burgess fell to an absolute peach of a delivery without adding to the total. Cookson then himself was dismissed, caught behind. It meant Ovington went from 70-0 to 70-3 in a matter of three overs.

After what could be described as a shaky start due to some fiery bowling from ex-Ovington Oliver Garner-Steel, the pairing of Matty Roberts and Charlie Buckley put 95 for the next wicket. Buckley especially played some superb shots on the off-side, ably supported by Roberts. Once Buckley fell for 45, Roberts took over. Employing some reverse sweeps into the mix, his knock of 73 not out was a fine one. At the other end, Tom Armes (25 from 23) and Tom Irwin (25 not out from 18) scored quickly and put Ovington on their highest total of the season so far. 248-5 looked a slightly above-par total on such a good pitch.

Wickets in reply were hard to come by for the away side. John Askham at one end rode his luck somewhat but he and Andy Tute got Acomb to 60, before Jack Eckersley-Wilson dismissed Askham for 20. That put Acomb on 60-1 after 17 overs. The next twelve overs was dominated by the scoring of Andy Tute. An exemplary innings, he barely gave a chance and Ovington spectators were right in getting slightly anxious about the way the game was going. After himself taking a wicket at the other end a few minutes earlier, Benji Busby dipped into the remaining overs of Dom Kitching to try and dismiss Tute. After being hit for four through third-man first off, Tute was wrapped on the pads twice before being bowled by Kitching. It was an excellent innings, with 90 coming from 88 balls faced.

That moment in truth signalled the end of the Acomb run-chase in reality, as the incoming batters struggled to score with the same ease as their predecessors. Benji Busby bowled as well as he has all season, ending up with figures of 3-47 from his 11 overs, while Jack Eckersley-Wilson finished on 3-43. Acomb stuck at it and reached the batting 75% target, ending up on 205-7. Alex Garner Steel on 41 not out.

An important win after last weeks defeat for the First Team. The league table is a much of a muchness with many teams on similar points. Wins like that will be important as the season progresses.

Seconds skipper inspired from the past

It was great to see Sam Prangnell at the Acomb game yesterday. For those new to the club, Prangnell was well-known as a captain of the second team who would rarely make an impact with the bat or ball. He would though make up for it with his captaincy. Current captain Luke Smith has had a dreary time with his individual form this campaign but his captaincy in the ‘Prangnell role’ has put the seconds within touching distance of the top spots. They travelled to Melbourne on Saturday. A viral TikTok dance was promised but what did occur was a solid bowling performance from an unlikely source.

Unlikely hero with the ball

Stefan Littlewood has contributed with the bat for the First Team and with the Gloves over the last few seasons. Neither was required yesterday. Instead, his ten over spell netted 3-25, including the important wicket of Ollie Steels. It put the hosts in all sorts of trouble at 46-5. Dick Buckley was extremely economical with the ball, his ten overs only going for 14 and with two wickets to his name. For the hosts, only Freddie Taylor reached over 20 as Melbourne were kept to 104/9.

Chase gets off to a rough start

It is sometimes a tough chase at the Melbourne ground for a multitude of reasons. Ovington started poorly and found themselves 16-2. It was Jacob Lamb (23) and Stefan Littlewood (36) who helped steady the ship. Both fell in quick succession though and at 73-4, some nerves were sure to have set in. James Mason (17), new signing James Walker and the in-form David Warner (12*) helped Ovington home for the loss of seven wickets. Thirty points secured and winning ways for Ovington returned after last weeks cup action.

Wilkinson puts Burn to the sword

The Third Team hosted Burn II on the Little Knavesmire. Ollie Thrift took charge due to holidays. He took the gig seriously, netting regularly throughout the week and the day of the game. It didn’t help in terms of winning the toss, as Burn batted first and put on a formidable 225-9 from their 40 overs. There was plenty to like though from the Ovington bowling attack. Thrift himself only went for 2.50 an over, ending on 1-10. The headline figures came from James Wilkinson. A good Under 9, he then subsequently did not play cricket for 10+ years before returning last season. His six over spell netted five wickets, including the important wicket of top-scorer Vaughan Lindley. The spell ending with his figures of 5-33.

Chasing down 225 was always going to be tough for the Third Team but they went about it with a good attitude. Will Stockton batted at #3 and hit a rapid 29 while the father/son pairing of Jed and Joe Fowke, unaware that Vinicius Junior was to run their evening later on, both got good starts. Son Joe was the top-scorer of the two, netting 29 vs Jed’s 24. Ovington eventually finished 95 runs short, but putting on the respectable total of 130 from their allotted overs. It was not a return to winning ways for Ovington thirds this time around, but they continue to be competitive in Division Two.