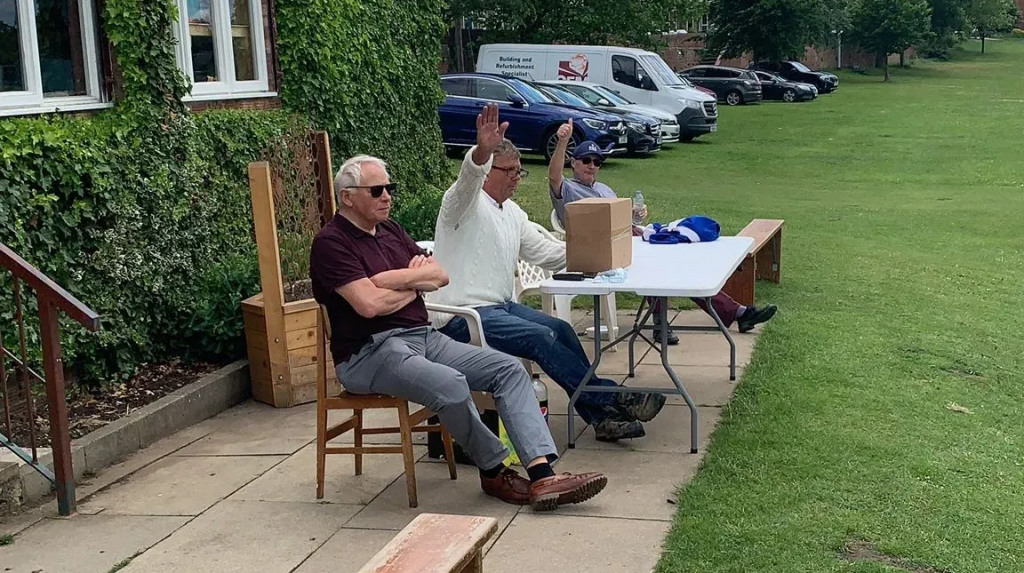 Three games for Ovington’s senior sides at the weekend. Two of which involved matches against Clifton Alliance. At one point, the game would have been a local ‘derby’ given the Alliance previously playing on the Little Knavesmire (allegedly). Both games provided drastically different spectacles. The First Team held fort against Knaresborough II.

Herringshaw takes the reins as Bishop strikes out.

The game of the weekend surprisingly came for the Third Team, who hosted Clifton Alliance IV at Millthorpe School. The visitors had nine juniors among their team but Ovington themselves were missing a few players too. They included Brandon Bishop, who seemingly does everything for the team except play! Vice-captain Ollie Thrift, who is recovering from a nasty bout of COVID. Liam Herringshaw returned to the fold to skipper the side, having previously shone with the bat at this level. Although the absent skipper Bishop preferred to bowl – Herringshaw was forced to bat.

On a fairly damp pitch at one end. Ovington batted first on a surface that was only going to get drier and easier. It was tough going to start with. Walton & Moore found the going difficult, both being dismissed cheaply and that fate was shared by Herringshaw and Albert Webb. It left Ovington with an uphill battle of 23-4 with all three dismissed from ex-Ovington junior Jonah Waites. Will Stockton returned and his partnership of 19 with Jed Fowke got the scoreboard in the right direction. Fowke fell to a loose shot from some drastic bounce for just 7. A similarly sized partnership between Stockton and Alex Howarth occurred off rather a lot of deliveries, followed then by Joe Fowke. Stockton eventually fell for a well-made 22 after trying to replicate a big straight hit for the second ball running. Wickets fell rapidly after that and 83-7 became 86-9.

The duo of Ajantha Egodawatta and Josh Blower are both known for liking a big shot or two. Blower was remarkably conservative in comparison but “AJ” did not get that memo. He got his eye in, punished the bad ball and his 16 from 18 balls, helped put the score well into three figures. They led Ovington to 121 all out from 34 overs. Adam Cockrill for the visitors bowled well for his 2-11.

Spectators from both sides mused whether 121 would be enough to defend with Clifton fans suggesting we were favourites. Early runs though did flow at a rate of well in excess of the target but so did wickets. The scoring was dominated by Ranadeep Banerjee but he struggled for partners to keep him company. Only #3 Calum Hart scored double figures, but he was out LBW to the last ball of James Walker’s spell. Replacing him was Ajantha Egodawatta. His spell couldn’t have started worse, with six runs conceded without a legal delivery. The patience of skipper Herringshaw was rewarded as his right arm round bamboozled two Clifton batters in the space of two balls. He got remarkable swing and movement from the unorthodox angle.

Clifton opener Banerjee gets the visitors close by himself

It still meant that Clifton were 66-4 but the only other senior batter had been dismissed. Banerjee from here on dominated the scoring and Clifton went to 89 . Josh Blower got in on the wicket-taking action as did AJ but they found Banerjee too tough to dismiss. The opener crept the score up to 118-9. It was a case of whether Banerjee could farm the strike or the youngster at the other end hold his nerve.

Howarth and Webb the heroes

Coming on for your first over was always going to be tough with the game so finely poised. Alex Howarth was tasked with it. The first delivery was a nervous wide but a dot ball followed. Requiring four to win, Banerjee attempted a big sweep shot to claim the game. He top edged it behind square, with the ball going high into the air. Under 15 Albert Webb sprinted to get underneath, overshot slightly and slipped, but managed to hold on to bring a climatic end to a brilliant match. Ovington won by three runs with Banerjee out for 65. It was a terrific match played in the right spirits and another win for the Thirds for the season.

The Second team tried to match the Thirds achievements as they faced off against Clifton Alliance III on Sunday. There was a notable debut for Spencer Fern. Fans at Clifton Alliance were treated to a similarly tense match which went down to the last over. High quality cricket was in full display.

Unfortunately for Ovo fans, it involved the Clifton first team beating Sheffield Collegiate in the Viking Cup. The match next-door at ‘The Snake Pit’, in the shadows of the Dan Woods pavilion, was a one-sided contest which was won by Clifton by seven wickets. Keyur Patel got his first fifty for Ovington as Cristofer Gwilliam-Lopez took 8 wickets for the hosts. Josh Blower’s catch in the slips was another highlight on a tough afternoon.

The post-mortem after the match involved a rallying call for more people to attend training and an early start-time to accommodate. Unfortunately for readers, this was tonight (Tuesday) so those vying for a spot of practice in the nets might have to wait a whole week for another crack at it. The numbers present were good.

Openers get Ovo off to a good start

The First Team hosted Knaresborough II on Saturday at the Little Knavesmire. All the ground conditions suggested bowling first to profit from the drying pitch, but we don’t chase well and that advantage was sacrificed. It originally looked a smart choice as Tom Cookson and Jack Walmsley put on 82 for the first wicket. The dismissal of Walmsley for 36 was a catalyst for a mini-collapse as it became 89-3 with Cookson run out for 39. Matty Roberts helped atone somewhat for his part in that run-out with 23 of his own and the middle order of Thomas Armes and Thomas Irwin (29) chipped in. Those at the other end struggled though and only a few runs here and there from others meant a total of 192 all out. Joe Sutcliffe took 6-43 for the visitors.

Dom Kitching opened the bowling and took two wickets to make it 20-2. There were some further in-roads made by Dom Everard but the visitors at this point came on very strongly. Andy J Ward looked in little bother and dominated the scoring throughout the middle overs. Those at the other end struggled to score quickly or in any great quantity. When Ward fell for 57 and the total 100-5, they had plenty of overs remaining and only around 90 runs to score.

That wicket was a crucial one though as Knaresborough reaching the target never looked likely. That was due to a destructive spell of bowling from Tom Cookson. He mystified the tail to take a five-wicket haul from as many overs. His 5-22 sealed the game and ensured another ten points in the bag for Ovington. At the halfway point of the season, we find ourselves 4th, but two of the three teams ahead were victories for us in that first half. It is certainly set up to be an interesting summer.