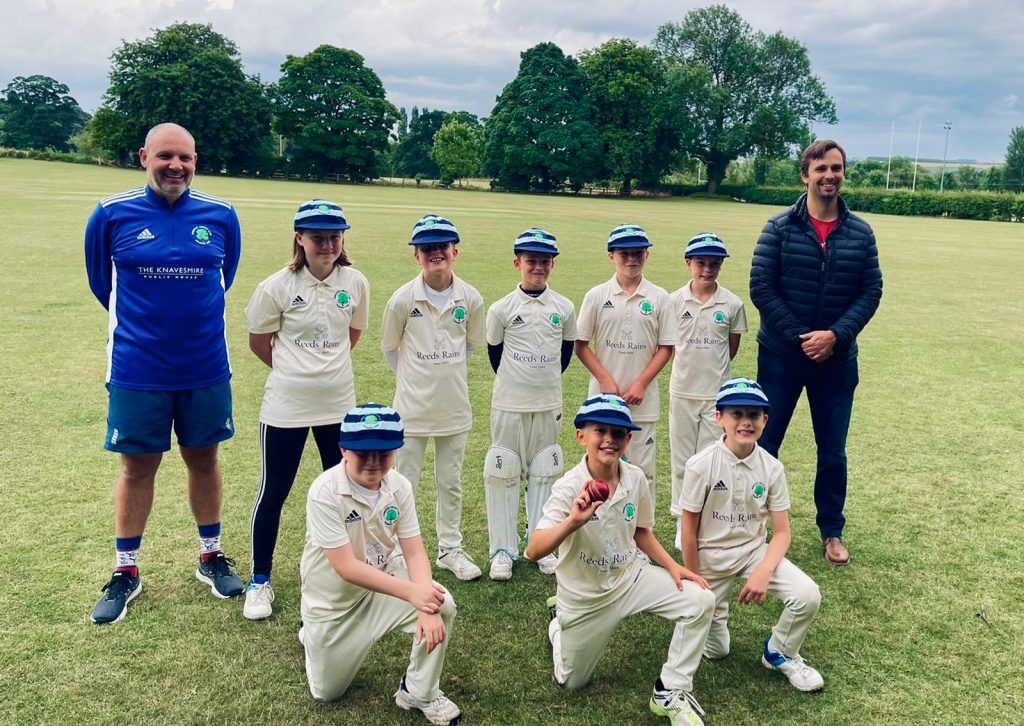 The Junior Season continued for Ovington’s representative teams across the past week and there were two big wins across the age-groups at Stamford Bridge, whilst our other teams also put in great displays over the last few days, with more cricket still to come! If you are new, the junior season lasts until early August altogether with training continuing until a similar time. There’s still to get involved!

Author note: Please let Dan Robinson/me know of any spelling errors when it comes to Ovington’s players on Play Cricket or in this match report. It is very helpful and all our young players they deserve their name spelt correctly! Apologies if this occurred.

Wickets all round against Woodhouse

Last Wednesday (22nd) saw two Junior games take place and both provided victories for the club. Woodhouse Grange hosted our Under 9’s B team, where the home team batted first. Ovington’s early bowlers made in-roads into the Woodhouse Grange batting. Our own Amaro Amaral, Megan Roberts, Toby Metcalfe and Mattia Coroneo Monteiro were among the dismissals. Edward Marshall for the home team hit some late runs but it still led Woodhouse Grange to only set a net total of 224 from their twelve overs. Ben Webster and Fraser Watt were the other bowlers who helped keep a lid on the Woodhouse Grange score.

Fraser Watt and Amaro Amaral opened the innings for Ovington and both came out of their partnership without losing a wicket. Dismissals were concentrated across a couple of the Ovington batters but importantly, those individuals scored enough runs with their other efforts to ensure no negative net score. Four of the Ovington batters finished on a score of seven as although there were no fireworks from the batting line-up, slow and steady definitely won the race. Ovington eventually were 30 run victors.

The other game was in the Under 11’s Hardball cup Quarter Final. These games are played under more conventional rules than Pairs Cricket. Ovington batted first and found themselves in real trouble early on. With the score of 4-3 after 4 overs, things looked bleak. The recovery was started with opener Oliver Craven sticking about with Matthew Pooley for company. When Craven was dismissed, the score was 29-4. Jacob Laing entered the fray, batting conservatively but his strike-rate wasn’t helped by numerous wides both had to face. The score ticked along throughout the middle to latter overs. Pooley was out for a well-made 13. Rory Walters joined Laing in the middle, scoring quickly in his innings of 20 and helping Ovington to the respectable total of 98-5. Jacob Laing was not out for 13.

Anything you can do, I can do better

Ovington’s bowlers bettered the home sides attack in our innings with a tremendous display early on. Jack Matthews took two wickets in the very first over of the game before Thomas Robinson got himself in on the act with two of his own in consecutive overs. It meant that the home side were 9-4 from after just a few overs. Ovington kept their foot on the gas throughout, as Phoebe Andrews dismissed the remainder of the top and middle orders with her spell of 2-6 from her three overs. That sensationally set the score at 18-6 from just a few overs.

Strength in depth shows up well

Ovington then rotated the bowling attack across the team but the quality did not diminish. Wickets came at a premium but runs hardly flowed either and the entire Ovington bowling attack did not go at an economy rate of more than five per over. Ethan Currie bowled two maidens and there was some brilliant wicket-keeping throughout from Oliver Craven. Two late run outs from some tidy Ovington fielding when the game was already won topped things off as Ovington cruised into the semi-final by 55 runs. They now play Acomb at home in the semi-final on July 7th.

It was not until the week after that Ovington junior sides next had competitive matches and there was more joy to be had for our sides at Stamford Bridge. This time it was our Under 15’s who were the visitors. Albert Webb top-scored in a Third Team game the previous day and his form recently has been very good, including at this ground. Here, in his own age-group, he excelled. He batted almost the entire twenty overs, agonisingly two runs short of a half-century. He got support along the way from Lucas Moore (19), Seth Young (14) as Webb hit 48 from 54 deliveries. It was the top score in the Under 15’s this junior season. He was only out in the final over to a great reception from the spectators. Harry Eckersley-Wilson scampered a few late runs in the final few deliveries as Ovington set a great total of 125/7.

Spencer almost gets a hat-trick!

Runs were at a real premium for the home side early on. At the nine over mark, the score was just 21-3. That was due to good bowling from Harry Eckersley-Wilson (1-3) and Casper Fleming (2-10). The middle overs saw Stamford Bridge recover with E. Easton and Tootell with good knocks, but the introduction of Spencer Fern (2-14) brought about two quick wickets in consecutive deliveries. Stamford Bridge left themselves too much to do as Ovington were successful by 28 runs.

There were mixed results on Tuesday for our sides. The Under 11 C team ran into the batting juggernaut of Dunnington and could not make a dent into their batting line-up. It was tough going but Ovington persisted as they finished chasing a net score of 91. Among the highlights was Harry Mellows (0-6), Fraser Watt (0-8) and Yash Fitzgerald (0-7). It was always going to be tough chasing such a big score but Ovington didn’t fall that far short truth be told. There wasn’t any double figure net scores but what there was, was a handful of solid batting performances. They came from Meredith Fricke, Yash Fitzgerald, Harry Mellows and Ethan Currie, as Ovington only fell 28 runs short.

The Two Oliver’s impress with the bat

It was also tough going for our bowlers as Ovington faced Malton & Old Malton in an U11’s B game. It was actually game for the batters amongst you as wickets were hard to come by for both teams. Ollie Breed got us off to an excellent start with 17, accompanied by Alex Taylor-Guino. The run-rate slowed down comparatively in the middle overs, but wickets were still at a premium. In the final pairing, Oliver Craven blasted 23 from just a handful of deliveries. It set Malton the target of a net score of 286.

Wickets hard to come by as Malton win out

It wasn’t to be for the U11’s B team though as they ran into too strong a batting line-up. Ethan Currie (1-8) was the main wicket-taker as Malton won by twenty runs. George Payne and Oliver Craven were two other bowlers who kept things extremely economical, with the latter picking up a maiden in his two-over spell. It wasn’t to be on Tuesday but Ovington have the chance to set things right in the U11’s age-group as our ‘A’ team face Malton on Thursday.

In better news on Tuesday, the Under 9’s beat Heslington by 43 runs. Still awaiting some news about that game!

Top-of-table clash versus Wheldrake for U9 ‘C’

Wednesday saw a trip to Wheldrake as our young Under 9’s C team aimed to go top of the table against their nearest rivals in this junior season. Ovington fielded first and took wickets with some degree of regularity. Those came from plenty of good fielding with a total of three run outs! The other three wickets arose from bowling from Henry Andrews, Mattia Coroneo Monteiro and William Bell. The home side did score at a good rate towards the close of play and set a formidable target of 276. Not insurmountable by any means.

The opening partnership of Henry Andrews (13) and Adi Davidesco both managed to avoid losing their wicket but Ovington found the middle-overs much tougher. Coroneo Monteiro did score a handy 14 late on but it wasn’t quite enough to get over the line, as Ovington fell agonisingly short by eleven runs. It was still a very good effort against effectively an “A” team. They’ll be many other days for this squad.

The Under 11’s ‘A’ team arrived versus Malton in a quest to avenge the defeat of the B team earlier in the week. The report isn’t yet on Play Cricket but we did have our roving reporter at the game! The game started and Ovington lost a couple of wickets via some really good fielding from the Malton players. There was a recovery of sorts though from the second pairing. Wilf Metcalfe was a key player in the middle order with a net score total of 19. He batted alongside Jack Matthews who showed off some excellent drives. That meant wickets dried up in terms of Ovington dismissals. The last pairing managed to keep their wickets intact against some sharp bowling. It meant it set a decent total of around 280 for Malton to chase.

The Malton chase was one of distinct sections. They had a couple of very good players who represented Yorkshire/North Yorkshire and whenever they faced the bowling, the ball invariably reached the boundary. Ovington then clawed themselves back into the game. Phoebe Andrews and Imogen Brook stormed in from one end to both claim wickets. Wilf Metcalfe and Jack Matthews were two that both caused real problems for the Malton batting, as wickets fell and the score needed didn’t look as gettable. Then, up came Thomas Robinson. After a bit of success initially, he suggested he bowl spin. This move was a tremendous one. He only narrowly avoided getting a hat-trick for his efforts as his final bowling figures were allegedly 6-2. A remarkable few overs swung the game heavily in Ovington’s favour and a win by around 40 runs. That means Under 11’s ‘A’ have won 5 in a row this junior season.

Other games played on Thursday will be included in next weeks report!